This entry is basically how it all began: the rogue gallstone attack that forced me into the hospital where I stayed for nearly 5 months.  This is the incident that would forever change my life.

Let this be a warning to you all. Had I first gone to the doctor’s, I would have spent a maximum of 1 day in the hospital and would have recovered 100%  in less than a week.

I’m sharing my story, not only for me, but as a warning to all who read this that you should go to the doctor immediately if something doesn’t feel right health wise.  It could save you a lot of time and stress.  It could save your life.

In early September, as I returned to the Czech Republic to resume work after spending a summer in Canada visiting family, I noticed that after eating I would experience sharp, shooting pain in my abdomen.  Thinking it was just indigestion, I would pop in a couple of Tums, but to no avail; the pain persisted.

After every meal the pain continued. Each attack would last anywhere from 5 minutes to an hour with the pain amplifying every time.

Worried about my health, I decided to play internet doctor and frantically scoured Google for my symptoms. My search found that what I was experiencing was very similar to gallstone attacks. Fortunately, I knew a bit about this since my parents and sister had gone through gallstone attacks/removal and it wasn’t a big deal. Relieved, I started to relax and the fear of dying left my subconscious.

After more searching, Google informed me that eating animal products (meat, cheese, other dairy,  etc.) can contribute to gallstone attacks, so I became a “temporary vegan” and miraculously the pain stopped.

The next few weeks I was swamped with work, so the whole gallbladder fiasco was now in the back of my mind. I knew that eventually I would need to see a doctor about the matter, but since I wasn’t consuming animal products, I thought the situation was under control (even a good friend of mine assured me that everything was ok when I would mention my situation to them). I felt relaxed, safe and at peace that I was fine and that nothing bad would happen to me.

After a few uneventful weeks, I stopped at a grocery store on my way home from work to pick up some lunch. In the freezer section, I noticed a box of “Texas style” pizza. Texas style, in this case, meant that the pizza had a thick crust filled with cheese.  This was a welcome change as the norm for European pizza is a thin, flat crust. Salivating, I decided that I must eat the thick crust, cheesy pizza. If it was going to cause me to get a gallstone attack – so be it. I felt it would be worth it!

Around 3 pm, I sat down at my computer desk with 2 slices of pizza and a coke while chatting online with some friends. Often, as on this occasion, I would watch a movie online with a friend, and this afternoon the featured film was “The Rocker” – a comedy starring Rainn Wilson. As the movie began, so did my consumption of the extremely cheesy (delicious!) pizza – and the sharp abdominal pains…

The pain started almost instantaneously after I swallowed my first bite of pizza.  It came on so suddenly and so intense that I had to pause the movie, make a joke to my friend about the pain (I always took light of bad situations), and laid down on my bed to ride out the attack.

After a few minutes when the pain subsided a bit, I would go back to my computer, resume the movie, double over in pain again, pause the movie, lay in bed.  Repeat.  This went on for at least an hour until I started to feel nauseous.

All of a sudden I felt the urge to vomit, so I ran to my bathroom and leaned over the tub and puked the pizza up (poor pizza). Afterwards, the pain started again, so I’d go lay back in my bed until a few moments later when I had to vomit again.  The puking was so terrible that at one point in between laying on my bathroom floor and spewing pizza chunks, I had to rinse out my bathtub because it was totally covered in puke and bile (because after the 3rd hurl, I had no contents left in my stomach).

Somehow during all of this, I managed to crawl back to my computer desk and finish watching the movie – albeit in 10 minute bursts. I have no idea why – it wasn’t even that good of a movie.

The entire attack lasted the whole night – about 16 hours – before I had my then-boyfriend call the equivalency of Czech Republic’s 911. 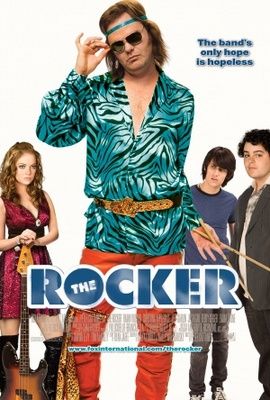 “The Rocker”. It wasn’t even that good of a movie…

This is the part that pisses me off the most – the clueless ambulance drivers that came to my flat.  I was in distress and could barely walk nonetheless.  I had a puke bag clutched in my hands for precaution (and yes, it was partially full).  Instead of rushing me to the hospital, the drivers sat idling and handed me some form to fill out before they would even start their engines.  Whaaaa….!?!?

In no condition to fill out any forms, one of my roommates stepped in and did it for me.  Also, they wanted an upfront payment of 1000 kc (or about $50 CDN).  10 minutes later, with 3 forms filled, and 1000 kc paid (thanks to my roommate for spotting me) –  the driver started the engine and transported me to a hospital that was less than 10 minutes away. Had I known there was a hospital nearby, I would have just called a taxi! It would have been much cheaper and quicker!

Later, when back in Canada, my family complained about this and found out that what the drivers did was against ambulance regulations.  We got the 1000 kc refunded and I’m not sure if the drivers got reprimanded, but I really hope they did because their behaviour was reckless! They could clearly see I was in physical distress and it was later revealed at the hospital that had I waited any longer (even 30 minutes), I would have died. So, yeah… I am shaking my fist angrily at you, ambulance drivers!!

When I arrived at the hospital, I was crippled with pain.  I sat in a wheelchair clutching a vomit bag to my mouth.  I was immediately wheeled into a room and was placed on an examination table. A very sympathetic nurse tried to console me as she repeatedly injected my bum with needles filled with pain killers.  Nothing worked.  At this point I was actually crying out from the abdominal pain.  I felt like there was some alien inside of my stomach clawing its way out.  It was pretty bad.  I try to make a point of not crying in public, but I couldn’t hold back. I bawled like a wimp!

It felt like an eternity had passed lying on that table.  A few doctors came in between the pain injections to look me over, smile, and pat my shoulder, but nothing else was done!  Finally they determined that I most likely had food poisoning. I felt insulted. I would not be a giant cry baby over something as simple as food poisoning! I have unfortunately had it before, and although it did cause me to vomit and have abdominal pains, it never made me writhe with pain.  But to make sure it wasn’t anything besides food poisoning, I was sent to have an ultrasound.  And of course, while sitting in a wheelchair, in absolute agony, they made me pay upfront for the ultrasound.  Luckily I had the 750 kc (roughly $35) and paid them promptly.

At this point, from all the vomiting, I was dehydrated but wasn’t allowed any fluids.  The ultrasound began and they noticed there was an obstruction – a gallstone – wedged up in one of my internal organs: my pancreas.  It was then, at this point, when they noted the severity of the situation and rushed me into the OR to have the gallstone removed.

I woke up a while later alone in a room and felt no pain.  I was instantly relieved!  They had removed the gallstone.  I figured the emergency was over and that I’d recover a bit and then be on my way home. Funny how things are never as they seem…

Shortly after a porter arrived and moved me into a step down unit.  I was surrounded by people in the makeshift ICU/Step down unit (as described in the entry “The Life of a Bored, Paralyzed Mute“).  It was at this point I noticed I had a catheter inserted.  And as ghetto as this sounds: I recall thinking I was glad I had that as I wouldn’t have had any energy to actually get up to go to the bathroom. Eeeps.

On the table next to my bed, my purse started to vibrate.  My cellphone was getting blown up by my work.  They were actually “annoyed” I was missing my classes, and that at such short notice they had to either cancel my classes or find an available substitute.  I remember thinking this was pretty rude as my roommate/coworker informed them that I was rushed to the hospital and had emergency surgery. I’d like to think they were so impolite because I was so amazing and that no one could replace me! Hah!

Starting that September, I had decided to work part time only. As a consequence, I lost my health insurance. So my parents urged me to purchase travel insurance “just in case”. That travel insurance is the reason why I am not living in a van down by the river right now…. broke as a joke.

My insurance company were literally lifesavers. They covered everything and had direct contact regarding billing with the hospital so my family and I would not be bothered by bills and paperwork. My insurance agent also called my mother almost daily with “updates” regarding my status.  And when I was in stable enough condition (after about two months), they even arranged a medical plane to fly me back to Canada (which turned out to be somewhat of a nightmare, read: “A Night In Reykjavik“).

Months later, they contacted us if they could feature my story for an advertisement promoting their company.  I was still very ill and learning how to walk and function as a human again, so I could not make the trip to Toronto. However, my father did.

We never did eventually see the advertisement/commercial, but I am sure we could get our hands on a copy if we asked. And I think I might just do that. I am really curious how it turned out.

GO SEE A DOCTOR IF YOU DON’T FEEL WELL OR IF SOMETHING DOESN’T FEEL RIGHT.  Oh, and make sure you have travel insurance if you go overseas. Hah.